Light is a recurrent theme in Brabant's business landscape. Philips, of course, is the oldest and best-known example, but you can trace a direct line of development between the CD, DVD and Blu-ray and today's most complex photonics applications with which dozens of companies in the province are now revolutionising global markets. One of them is Morphotonics.

If you compare a CD with an LP, the CD feels very smooth to the touch. But this famous Philips invention is also covered with tiny grooves that can be ‘read’ by a laser beam. And further miniaturisation is possible: Morphotonics in Veldhoven, a company started by the Philips Optical Media & Technology (OM&T) team responsible for the invention and production of the CD, DVD and Blu-ray discs, builds machines that print nanostructures. Not to play music though. This technology is used to improve the energy yield of solar panels or to enable 3D video on your smartphone. Co-founder Onno Lint: “We are definitely indebted to the technology with which OM&T produced CDs and DVDs at the time: applying a microstructure to the discs in a mass production environment.”

But where does the name Morphotonics come from? There is an obvious link to photonics. But Morpho? Lint: “That is the name of a large blue butterfly. Engineers know that this blue colour is not actually a colour at all; it is a nanotexture on the wings that turns blue when you look at it because of the effect of the light. That texture is almost impossible to copy, that's how beautiful it is.” Where his three co-founders - Rob van Erven, Jan Matthijs ter Meulen and Bram Titulaer - rely on their technical expertise, Lint is the business specialist in the team. “But I am very interested in technology, otherwise I would never be able to do this work.” 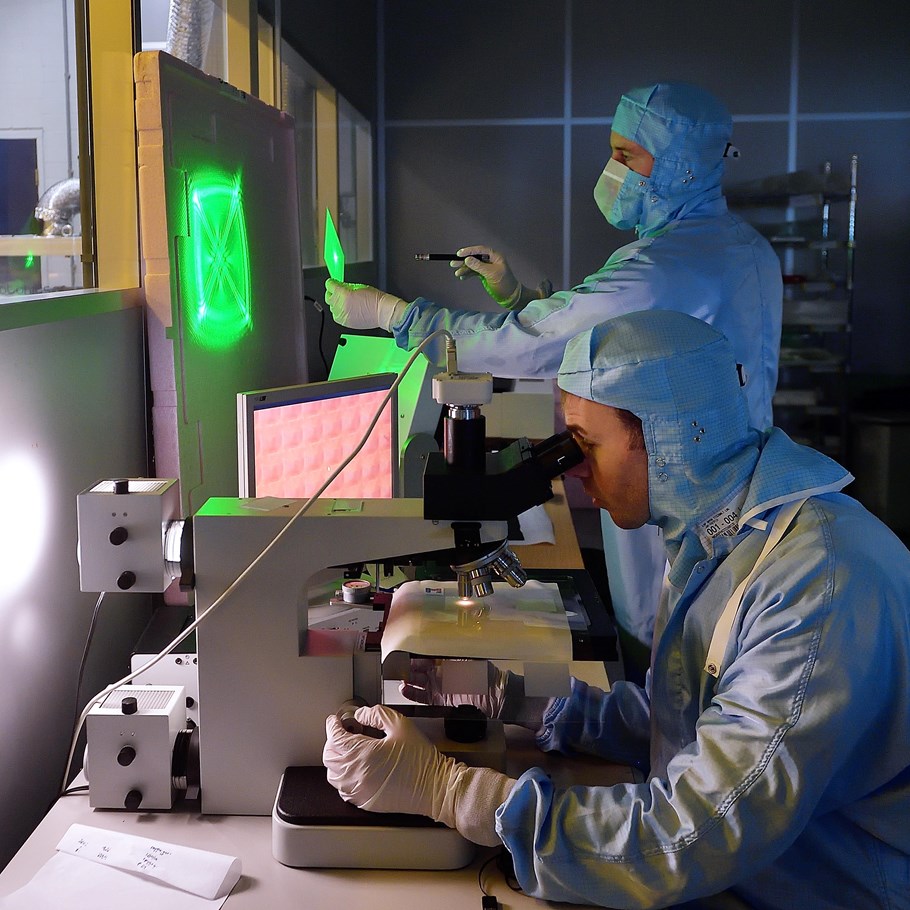 During the first four years of its existence Morphotonics stayed mainly under the radar. Although a lot was going on behind the walls of their building with its in-house cleanroom in Veldhoven - research, construction, fine adjustment, recalculation and sales - the outside world, with the exception of their customers, knew very little about the company.  That is why Lint was initially rather surprised when they received the Brabant Start-up Award in September 2018. “On the other hand, we were finally ready to reveal our products, so the timing of the prize was perfect.”

Morphotonics was founded in 2014, with a clear focus on roll-to-plate imprint technology for large surfaces. Although the production technology can be traced back to the CD, it has been developed further, both at the nano level and in terms of scale. Application of this complex technology can significantly improve the performance of products such as solar panels and give smartphone screens 3D and holographic capabilities. The company produces perfectly copied high tech textures that can influence light. Exactly like the Morpho butterfly.

Most companies that engage in this kind of work are located in Silicon Valley or China, but Morphotonics feels very much at home in Brabant. Lint: “Veldhoven has an excellent reputation internationally. Mainly due to ASML of course. Thanks to their activities, Veldhoven is now quite a familiar name worldwide. Furthermore, we are supported by a highly educated and skilled network here, with specialised suppliers, researchers and knowledge institutes. Many of them are ex-Philips as you would expect, but we are now also starting to see a strong ASML stamp. Knowledge centres like Utrecht, Delft and Twente are also very close by and we work intensively with IMEC in Leuven.”

“We owe a debt to Philips for developing the CD” The commercially viable innovation at Morphotonics is the ability to combine nano precision with very large surfaces. Like its large neighbour ASML, Morphotonics' customers work with wafer steppers that ‘draw’ very thin lines on the plates in a microstructure or nanostructure. “The difference is that where you would normally make about 40 wafers an hour with 1 product, we have managed to increase the number of products per plate considerably. This boosts the rate of production substantially and brings the price per product down to the desired level.”

The learning curve at Morphotonics was a steep one, says Lint. “Initially, we focused entirely on printing a solar-oriented texture on solar panels to capture light even more effectively. That was an outstanding technical feat and we are still involved in follow-up research, but the commercial context is difficult. The Chinese are fiercely competitive in this market and we have seen a gigantic increase in capacity in Asia in recent years. The entire German solar panel industry has now been wiped out, and Holland Solar has also disappeared. For us as an Original Equipment Manufacturer, there are no longer any profit opportunities in this market.” 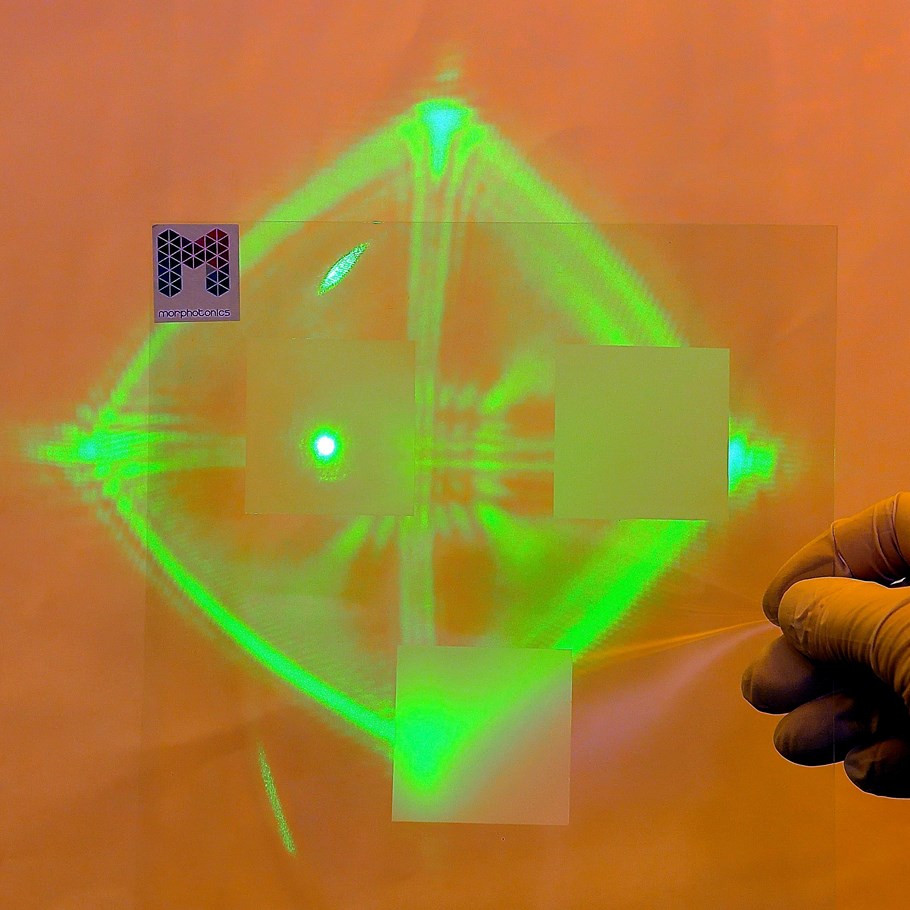 However the experience the company gained with solar did help it take the next step. “The work we did for our first solar customer showed that our imprint technology was not only technically correct, but could also be made scalable. We have now succeeded in achieving this with our production machine, which combines ink jet technology with the imprint process. We are the first company to do so successfully.” The first machine was sold at the end of last year; it is now used in Asia to produce parts for smartphones. No, Lint is not allowed to name any customers, even the country where the machine is now printing wafers at high speed remains a carefully kept secret, buried in the company's ledgers in Veldhoven. “Let's just say somewhere in Asia.”

Indeed, nothing could be clearer, the market for Morphotonics is in Asia. “China of course, but also Taiwan and Korea, and - due to the impact of US trade sanctions against China - probably Vietnam in the near future. All the companies that produce optical products such as displays are located in those countries. This does not alter the fact that Lint and his colleagues are happy to stay in Brabant for the time being. “And the great thing is: despite the enormous appeal of ASML as an employer, we have had no problems finding highly skilled and competent new employees so far. That really is the USP of this environment.” 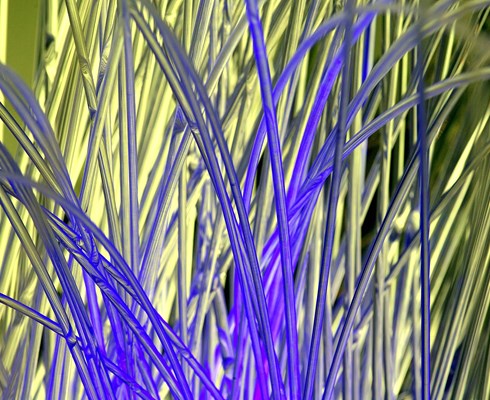 Photonics is more than a vague promise, says Richard Visser of SMART Photonics. "We are on the eve of something earth-shattering. Rather like the upheaval caused by the electronic chip.” 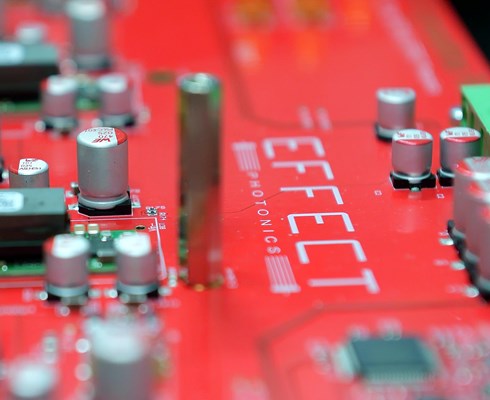 EFFECT Photonics is working on the Internet of the future

Photonic chips from EFFECT Photonics are faster and more energy-efficient than electronic chips. So they are a viable solution for our data centres that increasingly consume vast amounts of energy.