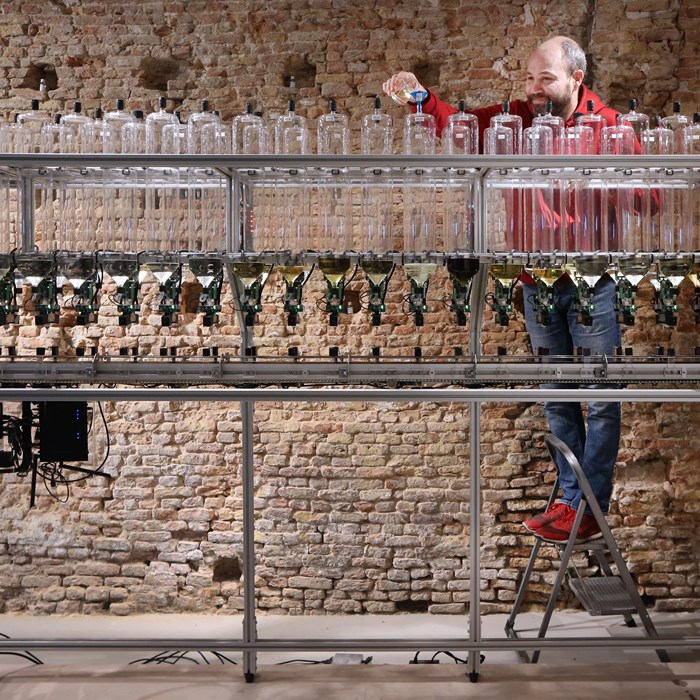 Scentronix is revolutionising the perfume industry

Scentronix is revolutionising the perfume industry with a new in-house production line for personalised scents. Data and AI are helping this start-up in Brabant to conquer global markets.

Are you a leader or a follower? Introvert or extrovert? Do you like woodland scents or do you prefer freshness?

Visitors who fill out this questionnaire can expect to spend quite a bit of time identifying their preferences. But it's worth it in the end. Because the Algorithmic Perfumery Machine uses those answers to recommend three scents, which are created by applying three different algorithms.

Next, three bottles are filled with the appropriate scent accords, which are chosen with the help of artificial intelligence. The bottles, which each contain a unique combination of scents to match each person's unique personality, are then transported to the end of the conveyor. 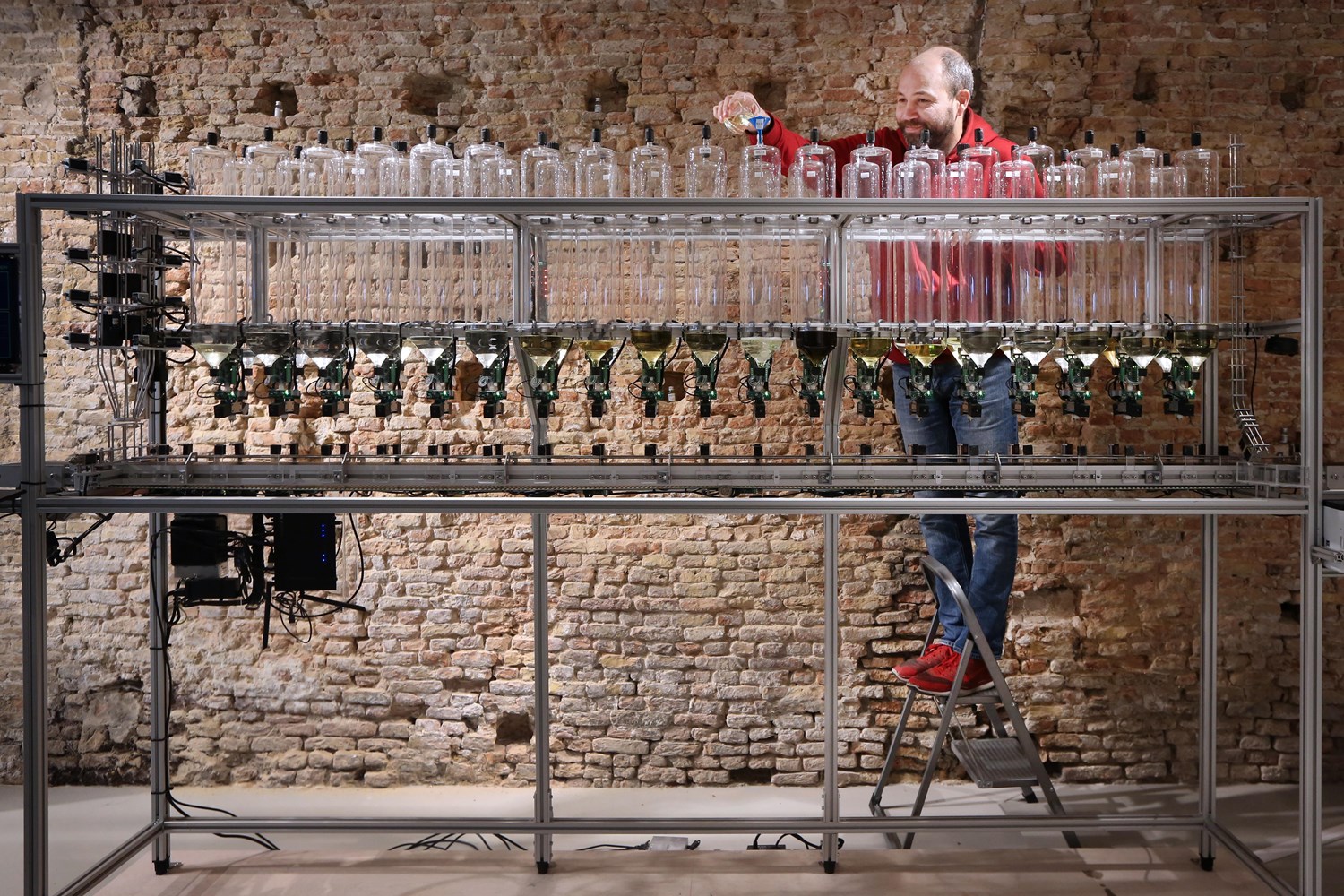 Scents for a better balance

So why would you want one of these personalised fragrance blends? To get closer to your inner self, says Frederik Duerinck, the Breda entrepreneur behind Scentronix. “In the traditional perfume industry, you buy a scent because a famous movie star wears it, or because you identify with the image of a classy perfume manufacturer. You are actually buying into an idealised image that has been created by others. Our approach is the exact opposite. For example, you may want to feel more balanced. With a scent based on your own personal preferences, you can perform an internal reset.”

Duerinck first started thinking about personalised perfumes a few years ago. As an artist and producer of documentaries, he has always looked for ways of immersing people in a complete experience that stimulates multiple senses. In his opinion, film fell short as a medium. How could he not only show an image of the scorching sun but also make people feel its searing heat? How could he truly transport his visitor away into another reality?

This train of thought sparked the idea of experimenting with scents, because they directly affect how you feel. Together with designers Marcel van Brakel and Mark Meeuwenoord, he created an innovative art installation that replicates the sounds and scents of the last minutes of the lives of celebrities such as Lady Diana and John F. Kennedy.

As a result of this art project, he was scouted by fragrance manufacturer IFF in 2016. Would he be willing to come to the company's headquarters in New York to discuss an innovative project involving fragrances and other sensory experiences?

All the pieces suddenly fell into place during a brainstorming session in America on 18 January 2017, a date that is forever etched in his memory. Things were not going so well, until Duerinck suddenly came up with his idea in a flash of inspiration. “I realised that anything can be a medium for telling a story. And that the sense of smell in particular is directly connected to the most primitive part of the brain, which controls emotions at a subconscious level.” 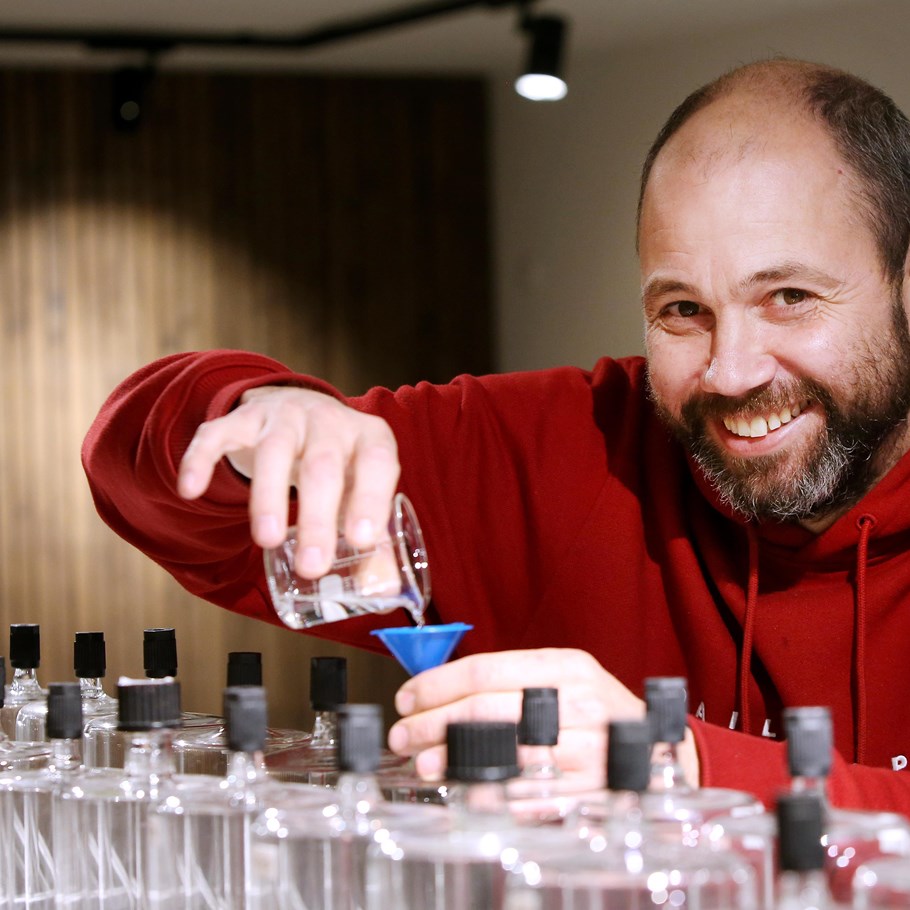 “When you create your own scent using our facility, you literally see the miracle of creation happening before your eyes.”

During that brainstorming session, his answer was not to scale up, but to individualise: a bespoke perfume for every user. Moreover, it had to be a perfume that every user could put together himself. Duerinck drew a rough, on-the-spot sketch of the experience he wanted to give the user as the creator of a personalised fragrance palette. “The machine that we now use to create the scents is still very close to that first sketch.”

After his brainwave, Duerinck pulled out all the stops to make his idea a success. He left his regular job and created a prototype for making personalised perfumes. Some months later, he presented his concept at an exhibition in New York, looking for investors. Successfully as it turned out, because the biggest investors in his company, Scentronix, come from the United States.

Although Scentronix is basically an American company, Duerinck chose to base his living lab and accompanying store in Breda. “I think the Netherlands is the best country in the world, because most things are well organised here,” he says. “Brabant is home to a wealth of technological knowledge and offers great employment opportunities. Thanks to my network here in Brabant - people I met during my course and former fellow students - I found it relatively easy to build a team of people who approach issues with a certain mindset.”

Duerinck now works with fragrances seven days a week. Smelling scents and making choices every day. His cabinet above the washbasin is filled with dozens of homemade scents. “Every day, I choose a scent that matches my mood. I have about ten definitions of myself that I can express with my scents. Sometimes I’m the frustrated guy who nobody understands. Sometimes I’m the humorous life and soul of the party. As a storyteller, I enjoy the magic of analysing my conscious thoughts and homing in on exactly the right feeling with a scent.”

Scentronix is not a mainstream beauty products business, as the company operates in a field where art, science and technology overlap and interact. “We empower people by giving them a choice and the opportunity of influencing the world. You create your own formula, which you can fine-tune as you wish. This approach runs counter to everything the perfume industry stands for.” 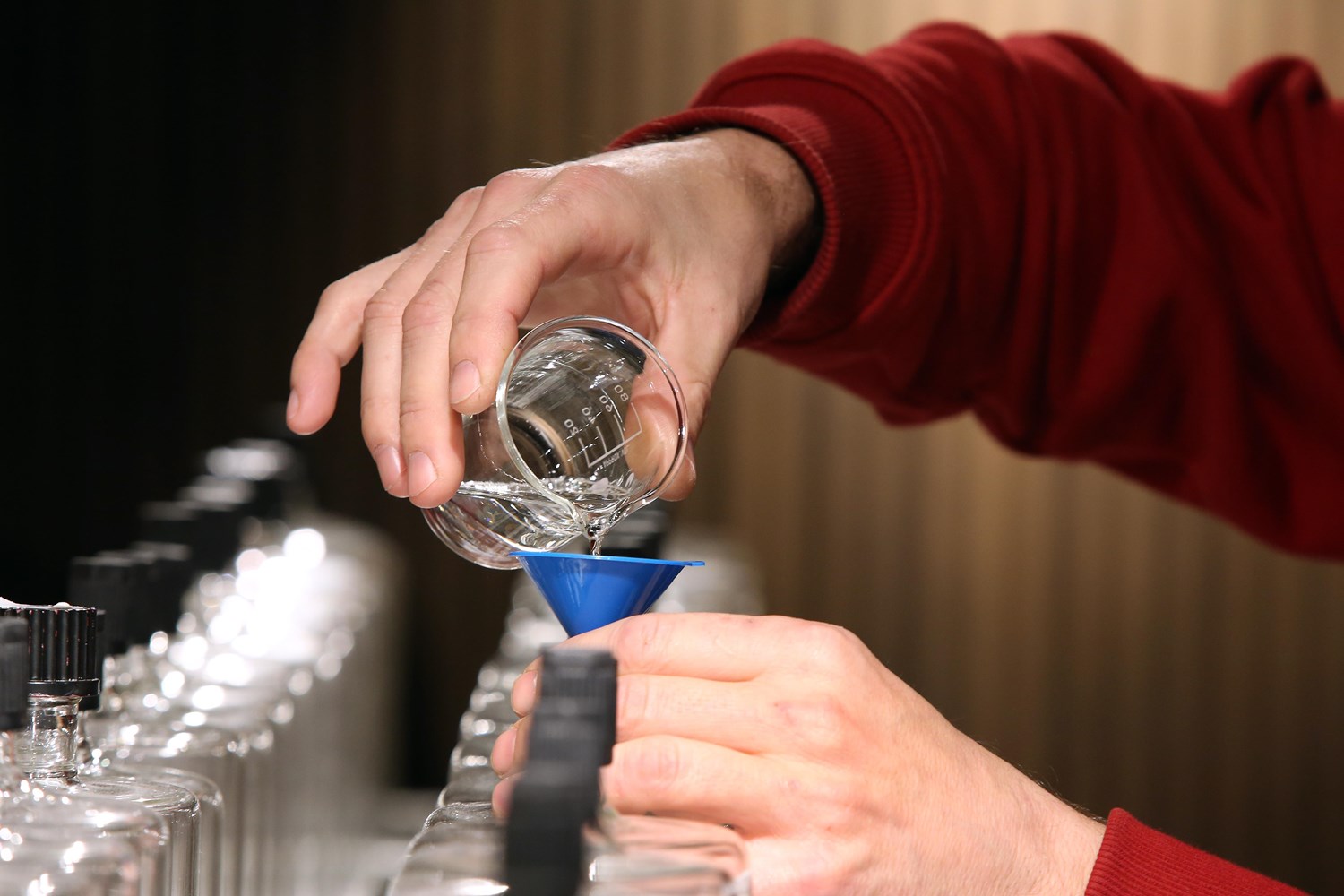 He is also continuing to build his company, which now employs 17 people. The company manages everything in-house: from creation, prototyping, quality assurance and safety to production, distribution, marketing and retail. “We have packaged the complete perfume industry value chain in a single platform. Pretty crazy when you think about it.”

He has opened Algorithmic Perfumery on Ginnekenstraat in Breda, a store where consumers can create their own perfume. However what Scentronix wants to achieve with its product - personalised perfumes - goes much further. For him, art and entrepreneurship go hand in hand.

“Scentronix has to operate as a successful business, because we wouldn't be able to raise the funds we require if it didn't," he explains. “We need an adequate level of investment and we have to be accountable to our investors. But the project also resembles an art project in that it questions the established order. We often take five steps forward and four steps back. But I don't believe in taking the easiest road, so you have to accept occasional setbacks. Entrepreneurship is really all about having the courage of your convictions.” 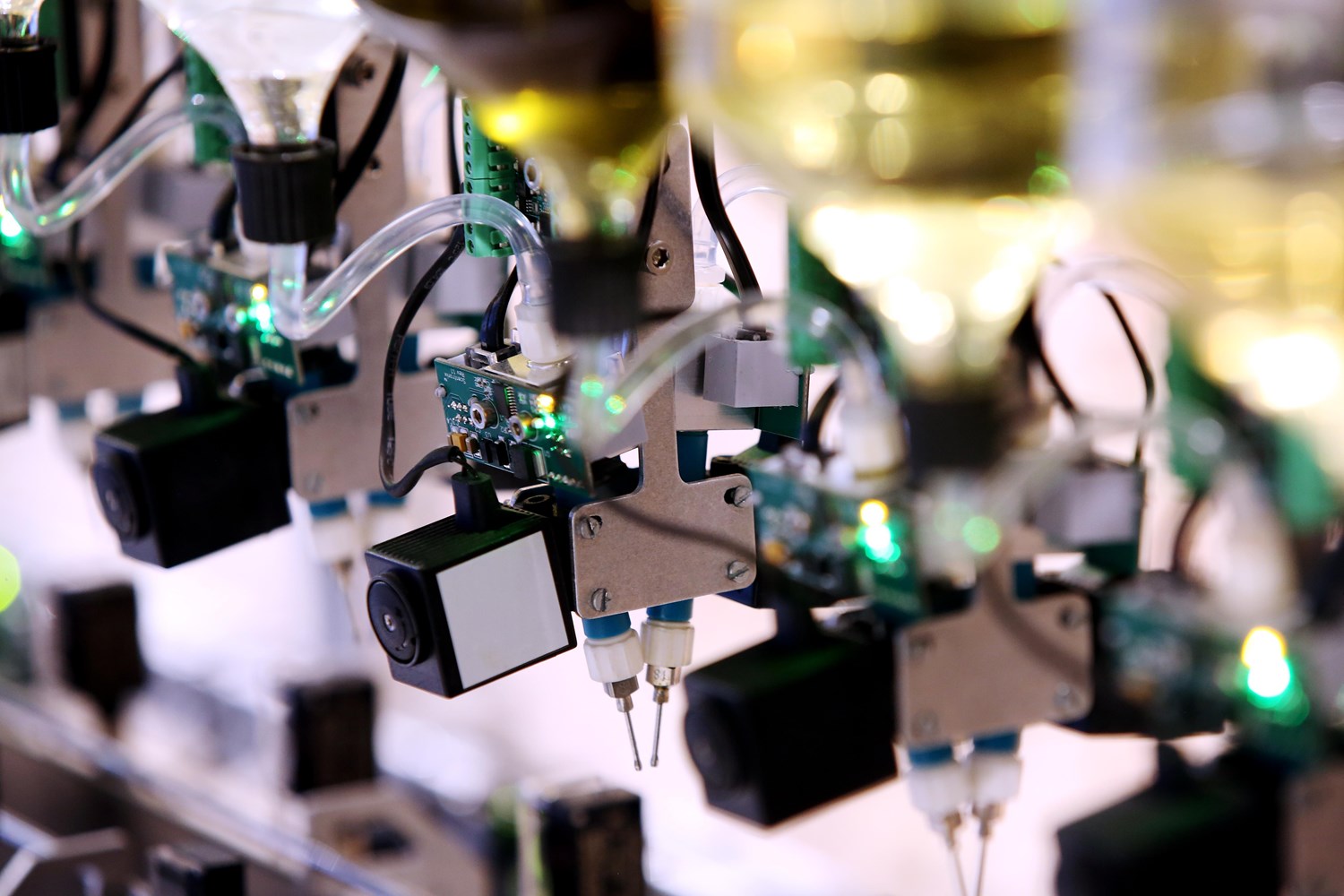 Scentronix is also closely involved in the mechatronics and ICT courses at Avans University of Applied Sciences in Breda and Mindlabs in Tilburg. They jointly engage in data research to make personalised perfumes accessible to everyone.

Duerinck ultimately hopes that his fragrances will help people become more conscious of themselves. Scents calm your heartbeat and heighten your awareness of the here and now. “Just as you create a certain mood through your clothing choices, you can consciously choose a scent and feel more empowered. The right perfume calms you and allows you to create a personal bubble. But I also want you to ask yourself where you want to go, what you're unsure of, and what things you want to do differently.”

The limitless potential of scents

The long-term goal is much more ambitious: a desire to understand perception. How do people perceive and what role do scents play in this process? To find the answers, Scentronix has filed an application for significant research funding together with Tilburg University and Wageningen University & Research. “This is a regional partnership, which also includes Avans University of Applied Sciences. We want to use data to predict perception and unravel associations,” he says. “A particular smell, for example, can induce appetite in a completely natural way. That would be an ideal solution for people who suffer from a lack of appetite.”