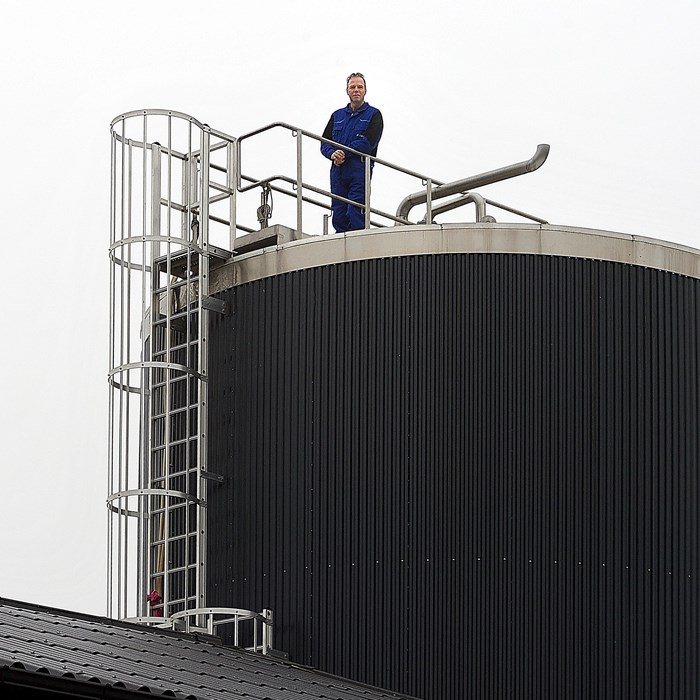 The Pig House of the Future’ aims to reduce pig farmers’ emissions of ammonia and odour nuisance. North Brabant has earmarked millions for this project. ‘Apparently people still have faith in us,’ says Hans Verhoeven of De Hoeve pig farm in Valkenswaard. Portrait of an inspired and enthusiastic farmer.

‘The Pig House of the Future’ will reduce pig farmers’ emissions of ammonia by 85% and odour nuisance by 70%. The Provincial Authority of North Brabant has agreed to invest several million euros in this project. ‘Apparently people still have faith in us,’ says Hans Verhoeven of De Hoeve pig farm in Valkenswaard. Portrait of an inspired and enthusiastic farmer.

We are sitting at the kitchen table and Hans Verhoeven is telling us the details of everything he has done to make pork increasingly sustainable since he set up a partnership with his father-in-law in 1985. He has been speaking almost continuously for more than an hour and it is hard to get a word in edgeways. He is a hugely enthusiastic farmer - and even that glowing description hardly does him justice.

Where does his enthusiasm come from? Hans Verhoeven shrugs his shoulders. ‘Just the nature of the beast,' he says - a fitting description for somebody who works with animals. But he is not totally satisfied with this answer. He looks questioningly at his wife, who is busy preparing the evening meal. ‘Hans always needs to be enthusiastic about something, otherwise nothing happens,’ she says. ‘Anything he is not enthusiastic about never gets done.’ Hans adds that his enthusiasm probably helps inspire other people. And that he is not afraid to call a spade a spade. That's Hans Verhoeven in a nutshell, according to Hans Verhoeven himself.

Pig House of the Future

So when the Provincial Authority of North Brabant came up with a plan to encourage the widespread adoption of air scrubbers by pig farmers in 2017, he decided to speak up. Because during the 250 visits that Hans Verhoeven makes to pig farms every year, he almost always finds that pig farms equipped with air scrubbers have major problems with odour emissions and that the pig farmer also has to use large amounts of antibiotics. Verhoeven has designed his own pig houses. Although his design does not use air scrubbers, the basic objective is to achieve the same reduction in ammonia and odour nuisance as companies that do. He does not use antibiotics at all.

His message to the Provincial Authority was: ‘What you want to set in motion is diametrically opposed to what we want to achieve as an industry’. The Authority was impressed and asked him to write a project proposal, which led to a grant of 2.6 million euros for The Pig House of the Future. This grant reflects the Provincial Authority of North Brabant's desire to attain the status of one of the most innovative, sustainable and smart agrifood regions in Europe by 2020. By that date, the agrifood sector will produce food in a manner that respects nature and the environment and is mindful of the health and welfare of both people and animals. 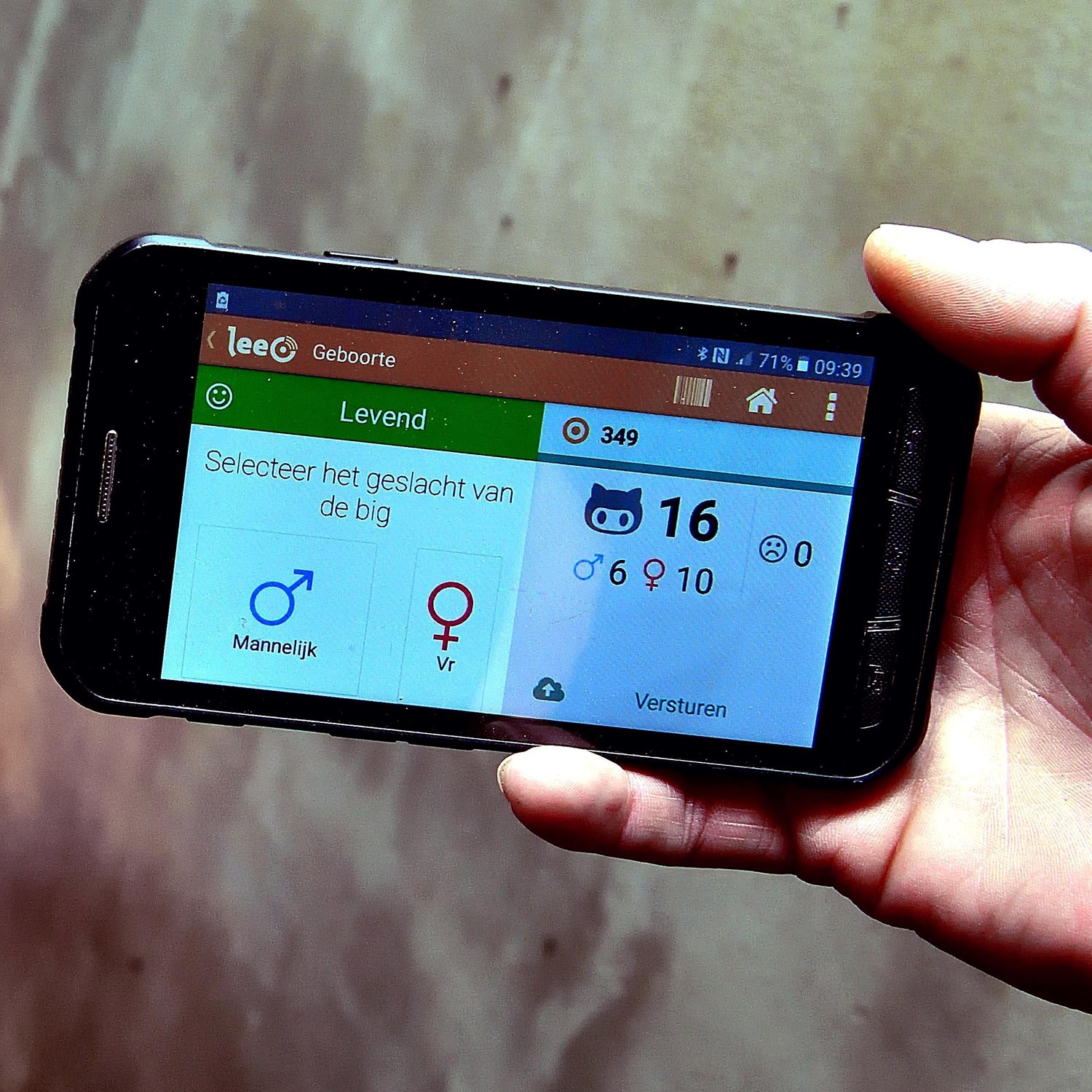 Innovation has always been his thing

It would appear that developing 'the pig house of the future' is what comes naturally to Hans Verhoeven. Innovation has always been his thing. For example, he designed a pig house with slightly convex floors ('to ensure that the pigs’ urine automatically drains away'). The water that will be pumped through his latest pig house design is maintained at a constant temperature of 17 degrees ('cool enough to be refreshing in the summer and not too cold in the winter'). The design also features electronic animal recognition ('unique in the Netherlands'). And he has installed a mono-digester ('we channel the manure into the digester, which produces methane, which powers a generator that generates electricity for the pig house').

Thanks to these and other features, Hans Verhoeven has succeeded in reducing odour nuisance, ammonia emissions and the use of antibiotics to zero.

Together with three other pig farmers, Hans Verhoeven is now using the Pig House of the Future grant to develop four different pig house systems that are expected to reduce ammonia emissions by 85% and odour nuisance by 70%. Rather than focusing solely on companies in the fattening pig sector, the pig house systems are suitable for all four categories of animal: farrowing sows, weaned piglets, pregnant sows and fattening pigs. And there is not an air scrubber in sight. 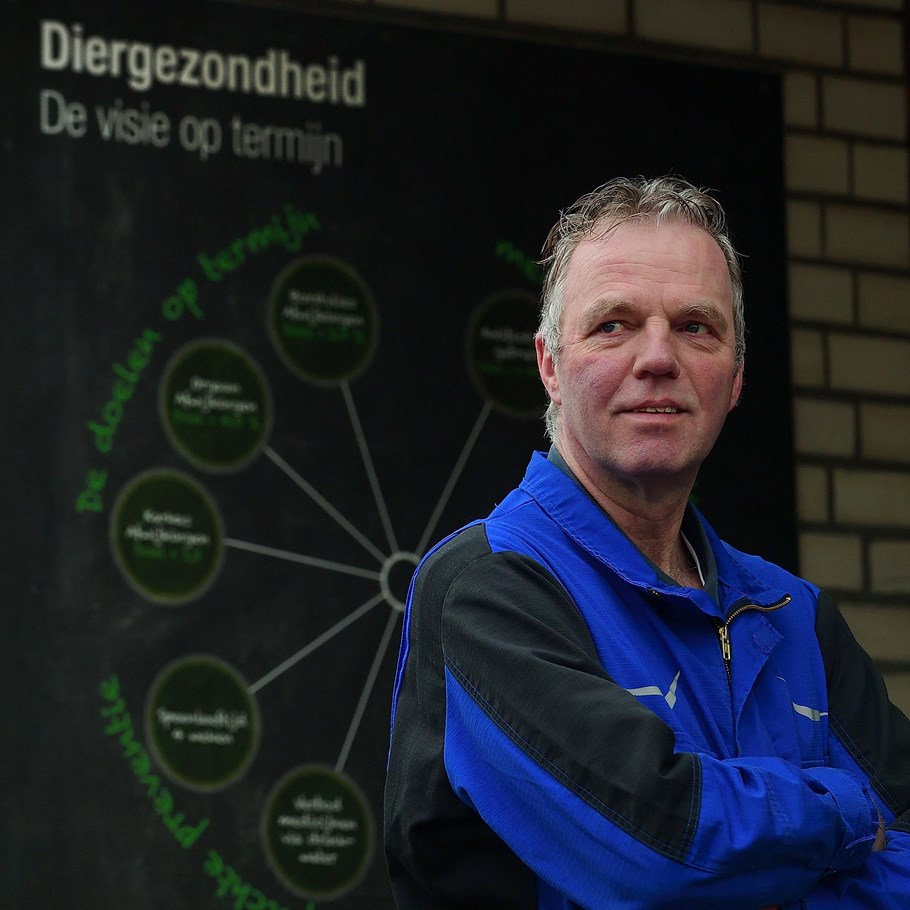 Hans Verhoeven believes that innovation is a must. ‘Without innovation, pig farming does not have a future in the Netherlands.’

Innovation is a must

Hans Verhoeven believes that innovation is a must. ‘Without innovation, pig farming does not have a future in the Netherlands.’ But you would be mistaken to think that everybody shares this opinion. He recounts anecdote after anecdote to sketch the obstinate resistance he has sometimes had to overcome. For example, he has been involved in many conflicts with environmental activists. Particularly in the 1990s. ‘But after five years or so, both sides concluded that we were entrenched in foxholes and simply firing the same old arguments at each other.’

Initially, he also had his doubts about the Dutch Mileukeur environmental quality label (an initiative of the Ministry of Housing, Spatial Planning and the Environment and the Ministry of Economic Affairs). The ministries invited him to a meeting in The Hague to try and elicit his support. Hans Verhoeven remembers the drive home with his partner as clearly as if it happened yesterday. ‘I complained continually until we reached Utrecht, then I fell silent between Utrecht and 's-Hertogenbosch, and just after we drove past 's-Hertogenbosch, I said: “Shall we get involved anyway?” He put his heart and soul into the label for ten years before coming to the conclusion that an alternative label would be more effective. That alternative, Keten Duurzaam Varkensvlees (KDV), is a collaboration between pig farmers, slaughterhouses, wholesalers, butchers, retail, the catering industry and producers of meat products. In 2012, he was invited to a two-day seminar in Sint Michielsgestel. He stood on the stage and defended the pig farmers, while local people up in the auditorium vocally expressed their dissatisfaction. I said: ‘Come down here for a chat; that will be a lot more productive.” When Hans Verhoeven returned home, he said to his wife: ‘I knew that people in rural areas were opposed to pig farming. But I had no idea that it was such a dominant phenomenon.’

‘I like to think ahead. Some people are obsessed by growth. I think in terms of continuity.’ 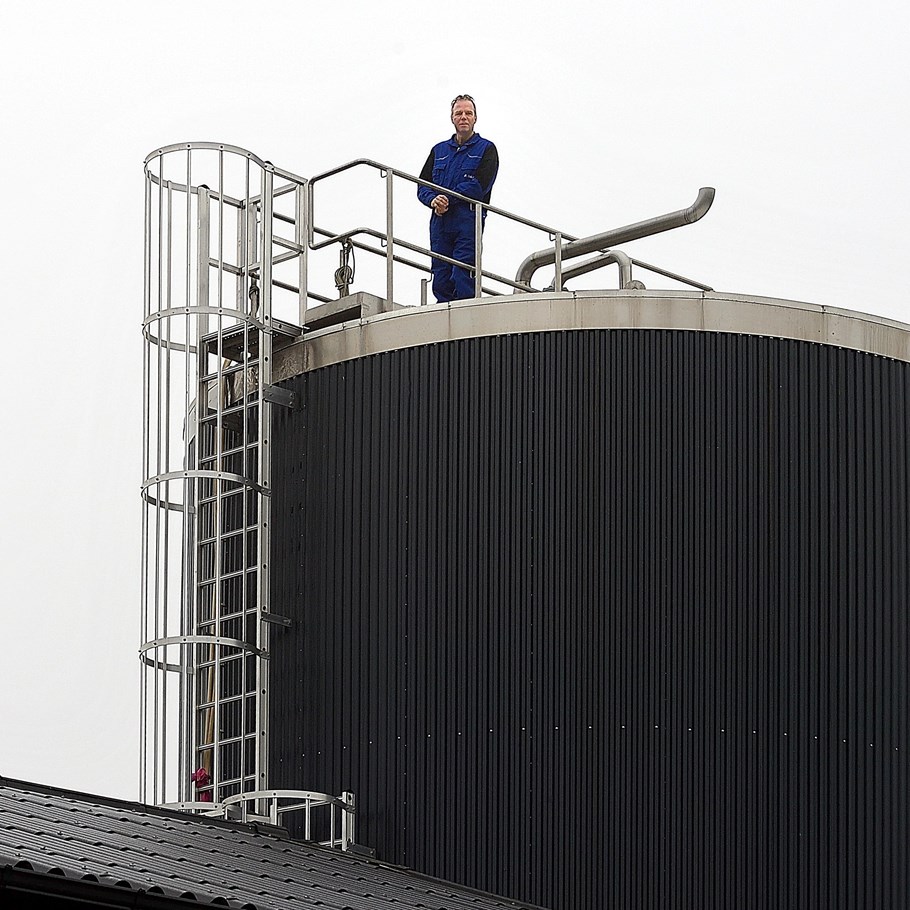 Hans Verhoeven was not deterred though. His main priority these days is to ensure the continuity of his business, De Hoeve pig farm in Valkenswaard. He continually asks himself whether the things he is doing today will keep his business strong and healthy and help him earn a good living in five years’ time. ‘I like to think ahead. Some people are obsessed by growth. I think in terms of continuity.’ Hans Verhoeven has 250 sows and 2200 fattening pigs at his farm. This is quite modest in comparison to most Dutch pig farms. But it is also a conscious choice. You need this scale to keep your costs manageable - e.g. the freight costs for fattening pigs - and to generate a return on your investment. ‘My business would not be any more profitable if I had 500 sows and 4400 fattening pigs. On the contrary; I would need more staff, would not be able to operate as flexibly and managing the health aspects would also be more difficult. You are doing well if you earn a good income, can invest in the environment and also satisfy social expectations. My objective in recent years has not been to increase the number of animals, but to earn more with the same number of animals.’

He sometimes encounters fellow pig farmers who see themselves as victims of government policy. Even when talking to his less optimistic counterparts, Hans Verhoeven - the man who always thinks in terms of opportunities - still tells things as they are. ‘Like good law-abiding citizens, we have complied with the regulations imposed on us in recent years. Most of us have had air scrubbers installed. With hindsight, it appears that they are not working as effectively as we had hoped, but we can hardly be blamed for that problem.’ Verhoeven also points out something else to pig farmers who have a more sombre view of the future: ‘The government has allocated two hundred million euros for revitalising pig farming in the Netherlands. Surely that shows commitment? And why do you think that the Provincial Authority of North Brabant has invested 2.6 million euros in the Pig House of the Future? Apparently people still have faith in us.’

His goal is to design smart pig house systems for the sector, so that fellow farmers can copy the designs and earn a good living. Hans Verhoeven is not primarily motivated by his own interests as a pig farmer. He is a steadfast supporter of Keten Duurzaam Varkensvlees (for which he visits the 250 companies mentioned previously each year) and meat processor Westfort (the company that developed electronic animal recognition). ‘I love this industry and it pains me to see it miss out on great opportunities. I hope to set things in motion by coming up with new ideas and demonstrating that they work in practice.’ He always used to visit the VIC (Pig Innovation Centre) in Sterksel on open days. ‘I was full of ideas when I came back home. Unfortunately, the VIC no longer exists. So we have to find new ways of spreading knowledge among farmers so that they can start to introduce new technologies and progressively transform their businesses.’

The latest news about agrifood in your mailbox? Enter your e-mail address and you will receive our mailing. 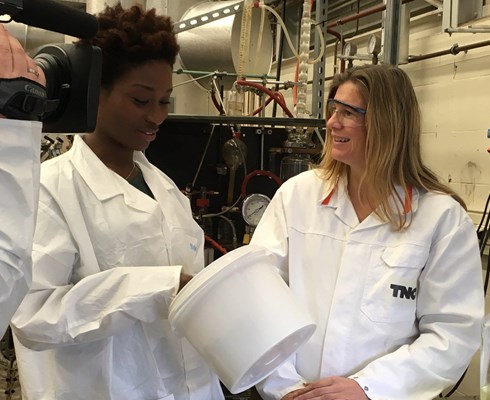 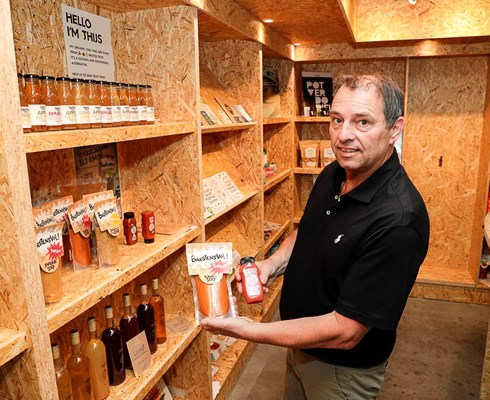 THREE-SIXTY in Veghel conceives innovative solutions for a circular economy. The Verspillingsfabriek (waste factory) is a good example.